Archivo de la categoría: A / An / The articles

How are you today? We are simply happy you’re here.

So what’s today’s grammar lessons about? It’s a beginner’s class on articles, plurals and nouns.

Articles A, AN and THE

The good news is that there are only three articles in English: “a”, “an” and “the”. These articles are separated into two groups: definite and indefinite.

“The” is the only definite article and we use it to speak about specific nouns. We use it for all nouns, both singular and plural.

So how do we use it?

Ok, now let’s look at the indefinite articles for singular nouns: “a” and “an”. We use them when we are talking of nouns in a general sense.

A plural is a noun that tells you that there is more than one of something. So “one cat”, “two cats“. See?

Most plurals are formed by just adding an “S” to the singular. But it is not always like this since we have regular and irregular plural. We say a plural is regular when it follows some rules.

Why not try to remember one every day?

We also have only plural nouns. What are these? They are nouns that have no singular form. So we don’t use “is”, we always use “are”.

We can also use “a pair” instead of “the”. This way we can use them as singular nouns.

Countable nouns are easy to remember because they are things we can count, like “horses”, “beds”, “dollars”. Easy, right?

Uncountable nouns are also easy. Why? Because they cannot be counted as separate things. For example: “water”, “sand” or “milk”.

We can use “some” with both countable and uncountable nouns.

Now, watch Ben’s video class with subtitles as many times as you need until you are able to understand it all without the subtitles!

Well done! You have learned all about articles, plurals, countable and uncountable nouns.

Publicado en A / An / The articles, Plurals, Some / Any | Deja un comentario

A, AN, THE : Articles in English

A, AN, and THE are called articles and they can be very confusing. Learn exactly when and how to use articles in English in this important grammar lesson!

Publicado en 6th year, A / An / The articles | 3 comentarios

Type a, an or the in the boxes below.

Publicado en A / An / The articles, Listening | Deja un comentario

Using A / AN before a word

Here you have some exercises to practice the use of A/AN before a word. 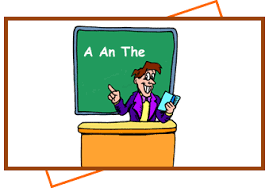 Publicado en A / An / The articles | Deja un comentario